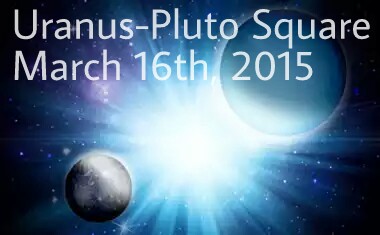 The seventh and final Uranus-Pluto Square in Aries and Capricorn comes together at 10pm tonight! It has been a process of breakdown, release, transformation & awakening with many changes occurring. This very powerful square is the last of a series of seven, the first being in June 2012, although the square has been active, though not exact, since 2010.

Life has changed tremendously for most of us during this time, as we’ve all been affected by its energy. It has changed our work, relationships, homes, health, wealth, and everything else in between. It has brought shocking events like accidents and sudden deaths. But also exciting changes, new relationships, jobs, and revolutionary thinking, and new ways of living and being, along with a total transformation of our world.

This Square series has totally reshaped our lives. It has been rough for many of us and there have been many lessons learnt along the way. But as a whole the human race has raised its awareness and collectively has changed.

If you look back to the previous Square dates, you may reflect on what changed or transformed in your life during that time….

Squares cause frustration and we’ve been in a constant state of very frustrating energy since 2010. After this final meeting tonight, we should slowly start to feel the Uranus-Pluto Squares grip let go, and be able to start breathing again. This final Squares influence is an opportunity for major change once again. The Universe is supporting us now… we must keep changing and remain aware, so that we can release old beliefs that no longer work for us.

Even though the Uranus-Pluto Square energy will continue to raise our awareness and initiate changes for many years to come. I’m totally excited….! The worst part is almost over and we shouldn’t feel this extreme energy after May of 2015, like we have been. Farewell to the Uranus-Pluto Square for the rest of our lifetime.
~Ruby